skip to main | skip to sidebar

Finally solved: the origin of Bd

Link to the article: https://t.co/LsC4g8xwxK

A deadly fungus responsible for the devastation of amphibian populations around the world may have originated in East Asia, new research has found. Batrachochytrium dendrobatidis (Bd), known as chytrid fungus, has long been identified as a cause of the decline and extinction of species of frogs, toads, newts and other amphibians across several continents.

Chytrid is distributed around the world but to date it has remained unclear where killer strains of the pathogen first emerged.

The researchers highlight the need to tighten biosecurity across borders, including a potential ban on trade in amphibians as pets to ensure the survival of vulnerable species.

Dr Simon O’Hanlon, from the Department of Infectious Disease Epidemiology at Imperial and first author of the paper, said: “Biologists have known since the 1990s that Bd was behind the decline of many amphibian species, but until now we haven’t been able to identify exactly where it came from.”

“In our paper, we solve this problem and show that the lineage which has caused such devastation can be traced back to East Asia.”

Chytrid is passed from animal to animal and spreads rapidly in the wild, causing catastrophic mortality and declines in some species, while others are less affected.

The fungus causes a disease called chytridiomycosis, which attacks the animal’s skin, affecting their ability to regulate water and electrolyte levels and leading to heart failure.

In this latest study, an international team involving 38 institutions gathered samples of the pathogen from around the world. They sequenced the genomes of these samples, combining the data with genomes from previous Bd studies to make a collection of 234 samples.

Researchers analysed the data, looking at differences between the genomes. From the samples, they identified four main genetic lineages of the fungus, three of which are distributed globally. A fourth lineage was found only in Korea, on frogs native to the region.

Cultures from this Korean lineage were found to contain much more genetic diversity than any other lineage. Deeper analysis of the Korean Bd showed no history of global outbreaks within their genomes suggesting the Korean chytrid strains were native to the region, and most closely resemble the ancestor of all modern Bd.

Using the genetic data, the team estimated when the killer strain of Bd currently plaguing amphibians diverged from its most recent common ancestor. Their findings support the idea that rather than dating back thousands of years, as previously thought, the range of the disease expanded greatly between 50 and 120 years ago, coinciding with the rapid global expansion of intercontinental trade. The team’s finding Asian strains of Bd in pet Oriental fire-bellied toads strongly supported this idea.

According to the researchers, human movement of amphibians – such as through the pet trade – has directly contributed to spreading the pathogen around the world. They add that the paper provides strong evidence for a ban on trade in amphibians from Asia, due to the high risk associated with exporting previously unknown strains of chytrid out of this region.

The group also highlights the threat of another amphibian pathogen which has also emerged from Asia (B. salamandrivorans or BSal) affecting salamanders in Europe and whose spread is also linked with the global trade in pet amphibians from Asia.

Professor Matthew Fisher, from the School of Public Health at Imperial, said: “Our research not only points to East Asia as ground zero for this deadly fungal pathogen, but suggests we have only uncovered the tip of the iceberg of chytrid diversity in Asia. Therefore, until the ongoing trade in infected amphibians is halted, we will continue to put our irreplaceable global amphibian biodiversity recklessly at risk.”

The research was supported by funding from the National Environment Research Council.

Posted by Benedikt Schmidt at 11:13 No comments:

The standing committee of the Bern Convention adopted a new recommendation on on biosafety measures for the prevention of the spread of amphibian and reptile species diseases. 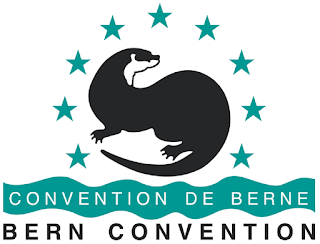 Posted by Benedikt Schmidt at 04:41 No comments:

Pascale Van Rooij and coauthors describe disinfectants against pathogenic chytrids (Bd and Bsal) and Ranavirus. This is an important paper which should be ready by everyone!

Posted by Benedikt Schmidt at 05:23 No comments:

In a new paper published in Scientific Reports (link), Corina Geiger and coauthors describe the results of a field experiments on Bd mitigation. They show that a transient reduction of prevalence is possible. 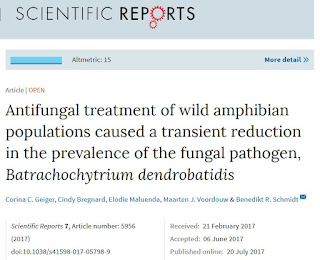 Here's the abstract:
"Emerging infectious diseases can drive host populations to extinction and are a major driver of biodiversity loss. Controlling diseases and mitigating their impacts is therefore a priority for conservation science and practice. Chytridiomycosis is a devastating disease of amphibians that is caused by the fungal pathogen Batrachochytrium dendrobatidis (Bd), and for which there is an urgent need to develop mitigation methods. We treated tadpoles of the common midwife toad (Alytes obstetricans) with antifungal agents using a capture-treat-release approach in the field. Antifungal treatment during the spring reduced the prevalence of Bd in the cohort of tadpoles that had overwintered and reduced transmission of Bd from this cohort to the uninfected young-of-the-year cohort. Unfortunately, the mitigation was only transient, and the antifungal treatment was unable to prevent the rapid spread of Bd through the young-of-the year cohort. During the winter, Bd prevalence reached 100% in both the control and treated ponds. In the following spring, no effects of treatment were detectable anymore. We conclude that the sporadic application of antifungal agents in the present study was not sufficient for the long-term and large-scale control of Bd in this amphibian system."
Posted by Benedikt Schmidt at 04:58 No comments:

The paper in Nature Communications: https://www.nature.com/articles/ncomms15048
Posted by Benedikt Schmidt at 23:43 No comments:

A new paper by Gwij Stegen et al. shows that the salamander chytrid fungus may be the 'perfect pathogen'. It kills salamanders rapidly and has a very high transmission. There is apparently no immune response by the salamader. There are reservoir hosts and two types of zoospores. 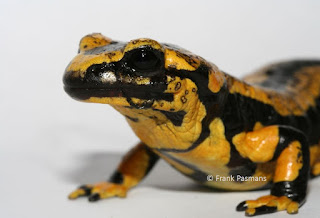 An infected salamander. Picture by (c) Frank Pasmans.
The paper in Nature.
The News and Views article by Mat Fisher.
The story in Science about the article.

Posted by Benedikt Schmidt at 22:54 No comments:

Did Bd cause historic amphibian population declines in Brazil?

A new paper by Tamilie Carvalho et al. in the Proceedings of the Royal Society shows that there is a link between Bd infection in tadpoles and amphibian population declines in Brazil (primarily in the Atlantic forest). Thus, Bd may have caused population declines a long time ago and even before it was described (1979-1987). The authors argue that these results suggest that Brazil is not the origin of Bd.

The abstract of the paper:
The recent increase in emerging fungal diseases is causing unprecedented threats to biodiversity. The origin of spread of the frog-killing fungus Batrachochytrium dendrobatidis (Bd) is a matter of continued debate. To date, the historical amphibian declines in Brazil could not be attributed to chytridiomycosis; the high diversity of hosts coupled with the presence of several Bd lineages predating the reported declines raised the hypothesis that a hypervirulent Bd genotype spread from Brazil to other continents causing the recent global amphibian crisis. We tested for a spatio-temporal overlap between Bd and areas of historical amphibian population declines and extinctions in Brazil. A spatio-temporal convergence between Bd and declines would support the hypothesis that Brazilian amphibians were not adapted to Bd prior to the reported declines, thus weakening the hypothesis that Brazil was the global origin of Bd emergence. Alternatively, a lack of spatio-temporal association between Bd and frog declines would indicate an evolution of host resistance in Brazilian frogs predating Bd's global emergence, further supporting Brazil as the potential origin of the Bd panzootic. Here, we Bd-screened over 30 000 museum-preserved tadpoles collected in Brazil between 1930 and 2015 and overlaid spatio-temporal Bd data with areas of historical amphibian declines. We detected an increase in the proportion of Bd-infected tadpoles during the peak of amphibian declines (1979–1987). We also found that clusters of Bd-positive samples spatio-temporally overlapped with most records of amphibian declines in Brazil's Atlantic Forest. Our findings indicate that Brazil is post epizootic for chytridiomycosis and provide another piece to the puzzle to explain the origin of Bd globally. 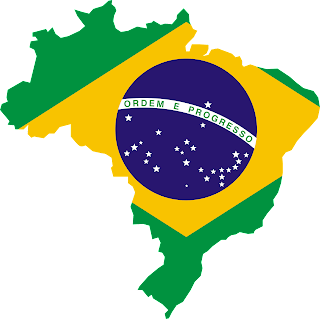 Posted by Benedikt Schmidt at 01:00 No comments: